Warning: count(): Parameter must be an array or an object that implements Countable in /home/pakizrmw/public_html/africanewswire.za.com/wp-content/plugins/feedwordpress/syndicatedpost.class.php on line 708

Warning: count(): Parameter must be an array or an object that implements Countable in /home/pakizrmw/public_html/africanewswire.za.com/wp-content/plugins/feedwordpress/syndicatedpost.class.php on line 708
 March, 2016 |

31 March 2016 – Senior United Nations officials today cautioned that the humanitarian and human rights situation in South Sudan remains dire, and asked the Security Council to call on the parties to the conflict and armed actors to uphold their obligations under international law to protect civilians and aid workers, and grant free access for delivery of life-saving supplies.

&#8220The challenge in South Sudan is an increasing disconnect between the assurances of national and the actions of local groups,&#8221 said UN Under-Secretary-General for Humanitarian Affairs and Emergency Relief Coordination, Stephen O’Brien.

He noted that civilians continue to be &#8220targeted, attacked and displaced&#8221 and that &#8220acute humanitarian needs persist&#8221 worsened by the recurrent lack of access.

Despite a Presidential Statement on 17 March, in which the Council urged the Government of South Sudan and the Sudan People’s Liberation Movement in Opposition (SPLM-IO) to allow people to move freely and aid to get to those in need, more than 17 incidents of obstruction of access have been reported.

These comprise of interference &#8220by parties from individual armed actors through to national authorities,&#8221 Mr. O’Brien said.

He noted illegal exactions and taxes, and demands at check points for payments to cross: &#8220Such extortions are unacceptable and must stop.&#8221

Aid workers and humanitarian supplies are targeted, with at least two worked killed since December 2013, and a conservative estimate of humanitarian losses since the beginning of this year of around $10 million.

In addition to the ongoing violence, the deteriorating economic situation is further driving instability. The monthly cost of food and clean water for an average family now amounts to 10 times the salary of a teacher, Mr. O’Brien said.

Despite such obstacles, the UN and partners were able to reach more than 4.5 million people with assistance, often in the most remote areas.

However, a critical lack of funding is hobbling future efforts, Mr. O’Brien warned. Of the required $1.3 billion earmarked to reach over 5 million people, only 9 per cent of the funding has been received from the international community.

&#8220Since December 2103, all parties to the conflict have committed gross human rights violations and abuses, along with serious violations of international humanitarian law,&#8221 the Deputy High Commissioner said. These include killing civilians, widespread sexual violence against women and girls, pillaging and destruction of civilian property such as homes, humanitarian infrastructure, schools, and medical facilities, including hospitals.

In addition, both the Government and opposition forces have forcibly conscripted children.

UN High Commissioner for Human Rights Zeid bin Ra’ad shares the view of the AU Commission of Inquiry, which found that the allegations of gross violations, including a number committed in 2015, constitute war crimes and/or crimes against humanity, Ms. Gilmore said.

She noted &#8220alarm&#8221 that the violence and insecurity was spreading to Western Equatoria and other areas that previously that been less affected by the conflict.

&#8220The legacy of violence and revenge underscores South Sudan’s urgent need for accountability for both past and present day human rights violations and abuses as well as for violations of international humanitarian law,&#8221 she said. &#8220Yet, in spite of the repeated public and formal commitments given by the parties to the conflict to end the violence and punish its perpetrators, no evidence has been found of any genuine efforts by either the government or the opposition to live up to their undertakings.&#8221

She echoed the calls of the High Commissioner for the formation of accountability and transitional justice mechanisms for South Sudan, including the creation of a Hybrid Court with a designated unit to support the witnesses and victims subjected to crimes such as sexual violence, and children.

Sustained progress in the country will require both parties to form a transitional government of national unity without further delay and demonstrate the courage to compromise for the sake of peace, said Special Representative of the Secretary-General for South Sudan and head of the UN peacekeeping mission in the country (UNMISS), Ellen Margrethe Løj.

Addressing the Council via videoconference from the South Sudanese capital, Juba, the Special Representative said that despite the signing of the peace agreement, violence continues in many parts of the country.

For example, tensions between the Dinka and Shilluk communities in the Upper Nile continue to be high since incidents in February, which included an outbreak of violence in the UN Protection of Civilians facility in Malakal.

&#8220Since that incident, UNMISS has been supporting humanitarian partners to re-establish facilities and restore service delivery within the site, while also providing force protection for food delivery,&#8221 Ms. Løj said.

Measures are also being taken to increase parameter security and the UN is engaging with local officials and community leaders to prevent further violence.

The UN Headquarters has launched an inquiry into whether UNMISS did all it could to protect civilians.

The next report of the Secretary-General will be available in the coming weeks, she said.

The Council also heard from the Chairperson of the Joint Monitoring and Evaluation Commission, Festus Mogae. He said implementation of most aspects of the agreement has been &#8220delayed.&#8221

However, he said both sides confirmed willingness to implement the Agreement and he has faith that the transitional government of national unity will be in power soon.

Among WFP’s most supportive and consistent donors – especially with flexible funds – Denmark is a highly-valued partner in providing assistance to millions of people caught up in emergencies in Syria, Yemen and South Sudan as well as in countries affected by the impact of El Niño.

“Denmark is one of WFP’s leading contributors of un-earmarked, flexible funds,” said WFP Executive Director Ertharin Cousin. “We appreciate Denmark’s example, not only in the context of the coming World Humanitarian Summit, but also because it is thanks to Denmark that WFP can respond quickly and effectively when disasters occur.”

In 2015, Denmark contributed US$58.3 million to WFP’s work, including US$34 million in un-earmarked contributions, making Denmark the fifth largest provider of such funds.

“The generosity of the Danish people helps provide assistance to vulnerable families affected by often forgotten shocks and crises; we ensure that help reaches those left furthest behind, first. In Denmark, WFP has a key partner and, working together, we can achieve Sustainable Development Goal 2 – Zero Hunger,” added Cousin.

WFP is the world’s largest humanitarian agency fighting hunger worldwide, delivering food assistance in emergencies and working with communities to improve nutrition and build resilience. Each year, WFP assists some 80 million people in around 80 countries.

One in five hospitals inspected in 2015 required a follow-up inspection for poor hygiene and maintenance, compared to one in 10 hospitals in 2014, according to a HIQA report.

Thirty-nine unannounced inspections were carried out by HIQA in 32 public acute hospitals between January 2015 and December 2015.

During the course of the 39 inspections, 64 clinical areas were inspected including high-risk areas such as operating theatres, endoscopy suites, haematology, oncology, intensive care and coronary care units.

Seven of the 32 hospitals inspected required a follow-up inspection primarily due to poor hygiene standards observed during inspections and poor maintenance and management of the environment and facilities. 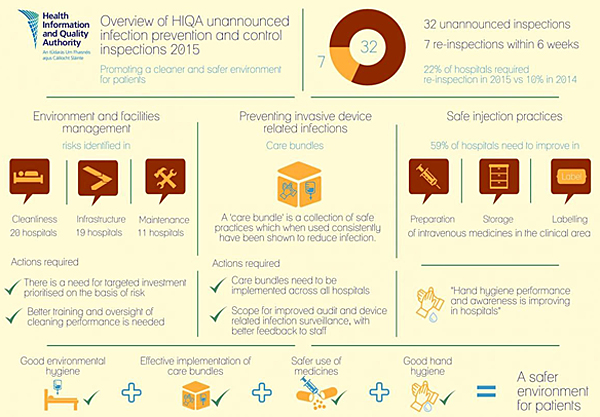 Re-inspections were carried out in the following hospitals:

In six of the seven re-inspections, hospitals had addressed most of the risks identified.

However, in one re-inspected hospital, no improvement in the standard of environmental hygiene was recorded.

“A clean and safe hospital environment is a fundamental expectation of patients, staff and visitors,” said Susan Cliffe, head of healthcare at HIQA.

“An acceptable standard of basic cleanliness is both essential and achievable with better management and oversight of cleaning performance”.

Some re-occurring findings relating to infrastructural deficiencies and maintenance included units that were outdated with inadequate infrastructure from an infection prevention and control perspective.

The report also found that overcrowding with limited spacing between beds was an issue for staff trying to circulate and manoeuvre patients.

The lack of pro-active maintenance programmes resulted in worn and poorly maintained surfaces which do not facilitate effective cleaning.

More than half (59%) of hospitals inspected in 2015 need to take action to improve the preparation, labelling and storage of intravenous medication in the clinical area, inspectors found.

Observations during inspections included pre-prepared syringes of medicines which were unlabelled or insufficiently labelled, inappropriately stored and left unattended and unsecured.

“It was evident during inspections in 2015 that overall, a greater culture of compliance with hand hygiene has begun to emerge in most hospitals,” added Ms Cliffe.

“This observation is supported by the reported findings from the HSE national audits that have shown steady improvement over time.

The daughter of a Dublin man stabbed to death in a Sydney restaurant has said she loves him “more than anything” and “will always be (his) girl”.
Keith Collins was having dinner with his girlfriend Jovi Pilapil yesterday evening – some outlets report …

Hundreds of young people flocked to the Exeter College Technology Centre to learn about apprenticeship opportunities with a host of local employers.

More than 50 employers were on hand to talk about their training programmes, with over 400 vacancies available.

David Thomas, managing director of Exeter-based Bluegrass Computer Services, said: “We have two roles to fill at the moment and we have met a number of potential applicants today. They have been asking really good questions and one lad even turned up with his CV.

“We have had three apprentices so far and they have all gone on to be offered permanent roles. From an employer’s point of view we’re getting young, enthusiastic people who we can train in the right way.”

Other employers taking part in the Expo included the Met Office, Gregory Distribution and Kitsons Solicitors.

“It’s been really informative and all the staff were very friendly,” said Isaac. “The main attraction of an apprenticeship is you get paid to learn, and you get to know the company you’re in, so afterwards you could be offered full employment there.”

The event was organised by Exeter College business apprentice Ella Fielding, who said: “It’s been a brilliant experience and I’m really pleased with how it’s gone. I’m really enjoying my apprenticeship and I’ve been given so many opportunities already.”

Elsewhere during the week, students from Exeter College visited BT’s city headquarters at Exbridge House, in Commercial Road, to learn about BT apprenticeships.

BT recently announced plans to create more than 50 new apprenticeship and graduate jobs in the South West with Exeter being the location in the region where the company expected to recruit the most apprentices in various roles, such as engineering and customer service.

The 10 students visited a variety of departments, including planning, engineering control and customer service, and also had a chance to hear from and talk to existing and former BT apprentices.

Simon Gale, of the BT apprenticeship development team, who organised the event, said: “I felt the day was a huge success. It was a real pleasure to see the enthusiastic students gain so much from the event.”