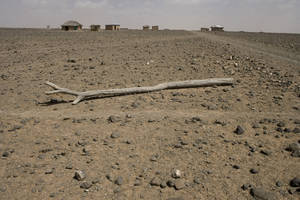 A parched field in Kenya. Drought is especially devastating to sub-Saharan agriculture.

26 November 2015, Rome – Droughts, floods, storms and other disasters triggered by climate change have risen in frequency and severity over the last three decades, increasing the damage caused to the agricultural sectors of many developing countries and putting them at risk of growing food insecurity, FAO warned in a new report released today ahead of the United Nations Climate Change Conference (COP 21) in Paris.

Worldwide, between 2003 and 2013 – the period analyzed in the study – the average annual number of disasters caused by all types of natural hazards, including climate-related events, almost doubled since the 1980s. The total economic damage caused is estimated at $1.5 trillion.

Focusing specifically on the impact of climate-related disasters in developing countries, some 25 percent of the negative economic impacts were borne by the crop, livestock, fisheries and forestry sectors alone. In the case of drought, over 80 percent of the damage and losses affected the agriculture sector, especially livestock and crop production.

The FAO report is based on a review of 78 on the ground post-disaster needs-assessments conducted in developing countries coupled with statistical analyses of production losses, changes in trade flows and agriculture sector growth associated with 140 medium and large scale disasters – defined as those affecting at least 250,000 people.

The report clearly demonstrates that natural hazards – particularly extreme weather events – regularly impact heavily on agriculture and hamper the eradication of hunger, poverty and the achievement of sustainable development.

The situation is likely to worsen unless measures are taken to strengthen the resilience of the agriculture sector and increase investments to boost food security and productivity and also curb the harmful effects of climate change.

“This year alone, small-scale farmers, fisherfolk, pastoralists and foresters – from Myanmar to Guatemala and from Vanuatu to Malawi – have seen their livelihoods eroded or erased by cyclones, droughts, floods and earthquakes,” said FAO Director-General José Graziano da Silva.

He noted how the international community recently committed itself to achieving the Sustainable Development Goals and the Sendai Framework for Disaster Risk Reduction 2015-2030 and is expected to reach a climate change agreement at the COP 21. Measuring progress made in meeting these global targets will require accurate, up-to-date information, including on the impact of disasters, Graziano da Silva stressed.

“National strategies for disaster risk reduction and climate change adaptation that support resilience must address the types of disasters with the greatest impact on the agriculture sector, the FAO Director-General said. He noted how sector-specific data on damage and losses are essential for effective policy and practice,” and that the FAO study aims to contribute to national, regional and global efforts to develop comprehensive disaster data collection and monitoring systems.

Drought critical in sub-Saharan Africa, flooding and storms are a scourge in Asia

Drought has an especially detrimental impact – around 90 percent of production losses – on agriculture in sub-Saharan Africa where the sector on average contributes to a quarter of GDP, rising to a half when agribusiness is included. At a conservative estimate, total crop and livestock production losses after major droughts were equivalent to more than $30 billion between 1991 and 2013 in the region.

Drought often has a major cascading effect on national economies as shown in Kenya where between 2008 and 2011 it caused significant losses in the food processing industry, particularly grain milling and coffee and tea processing.

Many Asian countries are particularly vulnerable to the impact of floods and storms. For example, crop production losses caused by the 2010 floods in Pakistan directly affected cotton ginning, rice processing and flour and sugar milling, while cotton and rice imports surged. In this case, some 50 percent of the $10 billion in total damages and losses fell on the agriculture sector.

Understanding the impact of different types of disasters is crucial to ensure that the most appropriate policies and practices are implemented.

Floods cause more than half of the total damage and loss to crops which are also very vulnerable to storms and drought. Around 85 percent of the damage caused to livestock is due to drought, while fisheries are overwhelmingly affected by tsunamis and storms such as hurricanes and cyclones. Most of the negative economic impact to forestry is caused by storms and floods.

Beyond production losses, the study shows how disasters can cause unemployment and erode incomes especially for small scale family farmers, thus threatening rural livelihoods. For instance, the 2010 floods in Pakistan affected 4.5 million workers, two-thirds of whom were employed in agriculture and over 70 percent of farmers lost more than half of their expected income.

FAO stresses that aid should better reflect the impact of disasters on the agriculture sector.

Investments into disaster response and recovery should also build resilience to future shocks through risk reduction and management measures, particularly in countries facing recurrent disasters and where agriculture is a critical source of livelihoods, food and nutrition security, as well as a key driver of the economy.