WebDesk
May 26, 2015 Comments Off on IAEA Impact: Indonesia Works Towards Cleaner Air

Indonesians can look forward to breathing cleaner air following upcoming changes in regulations introduced as a result of a study conducted using nuclear analytical techniques. Lead pollution and other fine particulate matter in the air is now, for the first time, being accurately monitored and is giving Indonesian officials a good understanding of their air pollution problem and how to manage it.

“This is a big step for us,” said Muhayatun Santoso, a senior researcher at Indonesia’s National Nuclear Energy Agency (BATAN). “We are looking to have strengthened environmental regulations in place before the country embarks on major energy development projects.”

This was not always the case. In 2006 Indonesia launched an urban air quality improvement project, aimed at having clean and healthy urban air in Indonesia in 2020. The country introduced a monitoring system that utilized a variety of conventional techniques, including air quality management systems in ten cities and passive samplers in 33 provinces.

“Due to limited resources, the air quality management systems couldn’t operate effectively in all ten cities — maintaining the system cost a lot of money,” Santoso said. “The system itself had limits too, and could not monitor particulate matter smaller than 2.5 micrometres, meaning it wasn’t detecting a range of potentially harmful air pollutants. We needed to improve the system and try something different.”

“Lead pollution from human sources is mainly fine particulate matter — less than 2.5 micrometres — and detecting these sources can be difficult,” Santoso said. Using proton induced X-ray emission analysis and knowledge obtained from the IAEA, the BATAN research team managed to trace the cause and source of the lead pollution in various areas, including in Serpong, near Jakarta. “We were able to associate a high percentage of the pollution to a lead battery recycling centre and production facility,” she said.

Results from the project have been used to help law enforcement crackdown on legal and illegal polluters and educate the public about the dangers of lead pollution, Santoso said.

Collaborating with local cities, provincial environment protection agencies and Indonesia’s Ministry of Environment, BATAN expanded the extent of the monitoring beyond Java. “We made a big step in expanding sampling locations from one site in Bandung, to 16 cities covering our biggest islands,” she said.

The air monitoring results are encouraging change at the legislative level. Outcomes from the lead pollution study have brought revisions to Indonesia’s law on air pollution control — lowering the threshold of acceptable lead concentrations in ambient air. “This contribution has showed a promising improvement of government commitment, policy and strategy to combat air pollution on a national scale,” Santoso said. The project is on track to expand further, using more techniques at more sites, she said. “In the next three to five years, we’ll be covering 34 cities, and accomplish our goal of monitoring the capitals of all of Indonesia’s provinces.”

Indonesia is rapidly developing and has plans to build more than 30 power plants in Java and Bali, including a 10 000 megawatt coal plant. These plants will be contributors to environmental pollution, requiring further monitoring, Santoso explained. New analytical characterization studies on coal feed, its combustion products and their impact on the environment will need to be pursued by the air pollution monitoring project, she said.

Assessing the environmental and physiological impact of toxic elements depends on exposure levels, quantities and chemical specificity. “Making elemental and chemical state analyses of arsenic, mercury, cadmium, nickel, chromium and lead — toxic trace elements associated with  coal burning — is crucial to us, but those elements are unfortunately below the detection limits of energy dispersive X-ray fluorescence and particle-induced X-ray emission, the nuclear technologies we’ve been using,” she said.

In the next three to five years, we’ll be covering 34 cities, and accomplish our goal of monitoring the capitals of all of Indonesia’s provinces. 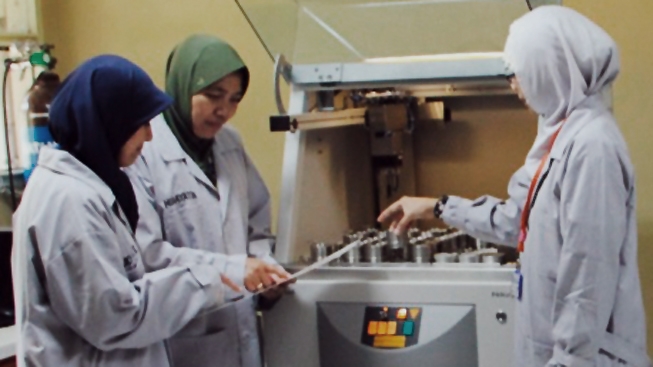 To overcome this limitation, Indonesia needs access to a synchrotron — a type of particle accelerator — that can help them analyse their samples. The IAEA is helping Indonesia analyse its samples using a synchrotron made available to the Agency through a coordinated research project with partner organizations in Trieste, Italy. BATAN hopes that this cooperation will give the air quality monitoring project more significant information about the speciation and chemical composition of their air pollutants, helping them to better evaluate its environmental impact and assure everyone a fresh breath of air.

Air pollution is a regional problem, Gashaw Gebeyehu Wolde, an IAEA programme officer explained. “Transboundary pollution is a serious concern, and by supporting training and by providing expertise, we help countries establish sampling mechanisms that can pinpoint the cause and source of air pollution,” he said. “It’s important to know whether pollution comes from a human source, or whether it is a result of a forest fire or volcano.” Through its regional programme, the IAEA assists countries throughout South East Asia with the development of a comprehensive regional database for shared use, and supports them in developing analysis capabilities locally, and, when necessary, provides avenues for samples to be analysed in regional resource centres that have more sophisticated analysis facilities, like those in Australia and New Zealand.

Particle-induced X-ray emission (PIXE) is a nuclear analytical technique that uses an ion beam — a beam of charged particles — to determine information about the elemental make-up of a sample.

PIXE works by exposing a sample to an ion beam. The interaction between the beam and the sample gives off electromagnetic radiation whose wavelength can be attributed to specific elements and isotopes. This can tell a scientist not only what a sample is, but also its origin.

The use of PIXE is not limited to air pollution monitoring; since it is a non-destructive analysis technique — it does not destroy the sample it is studying — PIXE can be applied in archaeology and art conservation.