Update 5pm: Murder victim David Byrne has been laid to rest in Dublin. The 34-year-old father of two died after an armed gang, some of whom were dressed as gardaí, opened fire at the Regency hotel in Drumcondra.

Following an hour-long funeral Mass in Dublin’s south inner city, three horse-drawn carriages carrying flowers followed two hearses to a cemetery in Harold’s Cross where he was buried this afternoon.

One of the wreaths they carried read UNCLE, while another arrangement read BEST PAL.

Hundreds of mourners attended today’s funeral. Plain clothes gardaí moved through the crowd, while uniformed officers patrolled the street with the assistance of the Emergency Response Unit on the ground and the Garda helicopter above.

The media was kept back and tourists moved up and down the street unaware of the reason behind the significant Garda presence.

The cortège, which included a fleet of stretch limos, made its way through the heart of the city without incident.

Update 2pm: The funeral mass of David Byrne has passed off peacefully and the procession will soon make its way to a nearby cemetery.

Mr Byrne, a father of two living in Crumlin, will be buried this afternoon at Mount Jerome cemetery in Harold’s Cross.

Several units of armed detectives were on foot on the narrow streets around the church today.

Additional heavily armed teams from the Emergency Response Unit circled the area in cars and 4x4s before and during the mass. The Garda helicopter was deployed overhead. 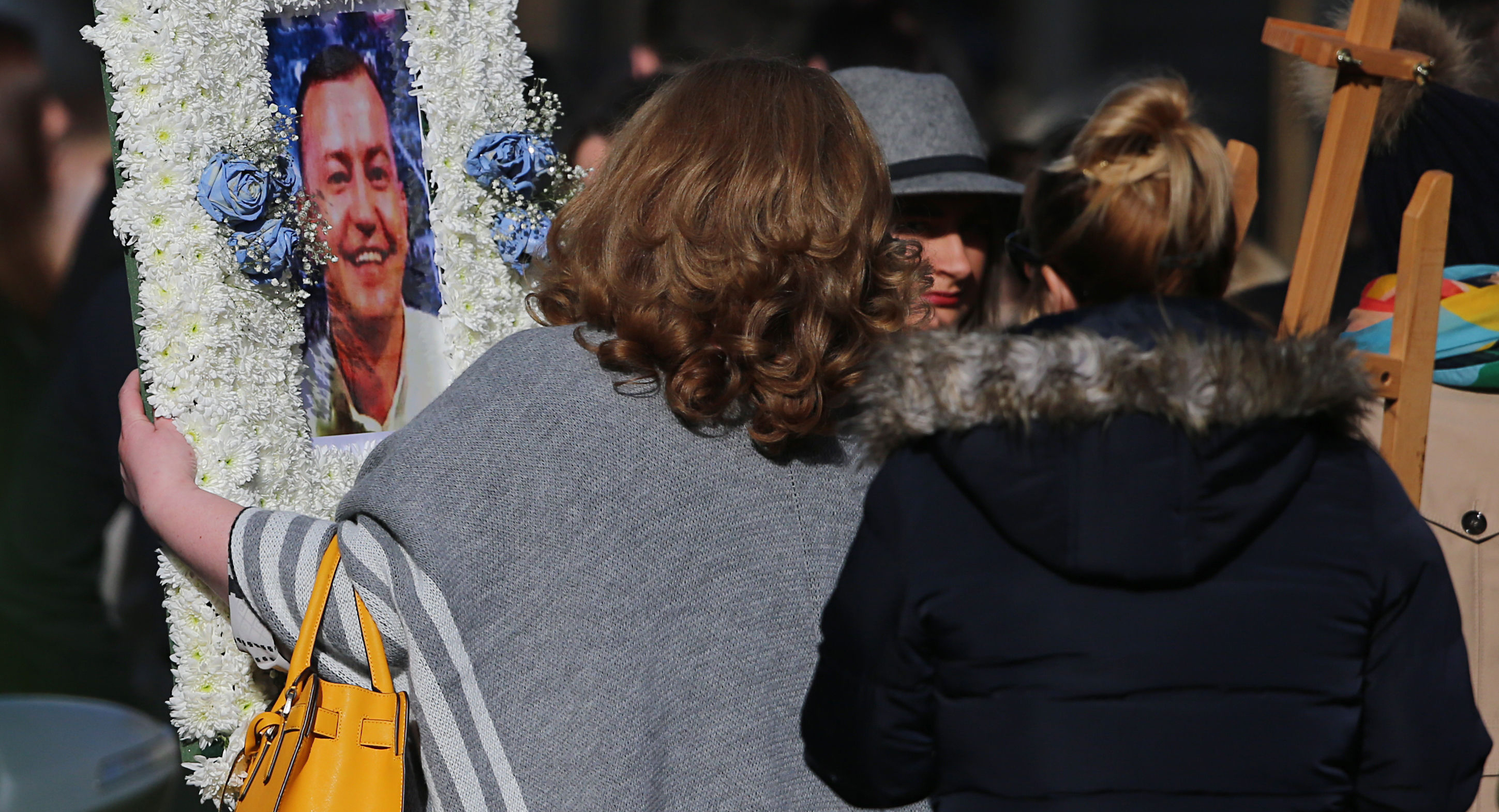 A floral tribute with a photograph of David Byrne is carried by a mourner into St Nicholas of Myra church on Francis Street in Dublin.

Among the mourners it is believed were Daniel Kinahan and his brother Christy Junior – who flew into Dublin Airport last night.

Their father is Christy Kinahan senior, 58 and originally from Dublin’s south inner city – who was arrested in a mansion in Spain in 2010 as part of an investigation into an international drugs and money laundering racket. Kinahan senior has not been charged.

Son Daniel, who manages boxers out of the MGM Marbella gym, had been in the Regency for the weigh-in when the hit squad struck in front of hundreds of people.

Gardaí have said they are keeping an open mind over suspected dissident republican involvement in the hotel killing.

The Kinahans are understood to be embroiled in a bitter feud with the Hutch family which turned bloody last September when Gary Hutch was shot dead in Spain.

He was a nephew of the latest gangland victim Eddie Hutch and also Gerry Hutch.

The 34-year-old was shot dead when an armed gang stormed the Regency hotel in Drumcondra 10 days ago.

Murder squad detectives believe his murder was retaliation for the shooting dead of Gary Hutch on the Costa del Sol last September.

Byrne’s killing was avenged three days later with the murder in his Dublin home of Eddie Hutch, 55, brother of Gerry Hutch, known as the Monk.

A train of black stretch limos slowly made its way towards the Church of St Nicholas Myra where David Byrne’s funeral mass is taking place, in front of hundreds of mourners.

Scores of people lined the narrow grounds and the street outside as the American-style casket holding Byrne’s body was shouldered past the crowd.

A lone piper played a lament while a large floral tribute with a picture of Byrne at its centre was also carried in.

The father of two was gunned down when a gang of men burst into a boxing weigh-in at the Regency hotel in Drumcondra last Friday week. 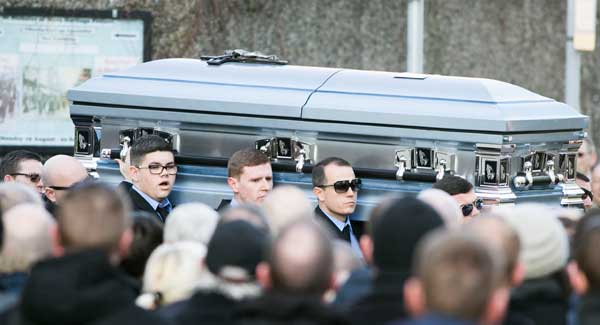 The remains of 32-year-old David Byrne are carried from his funeral in Church of St Nicholas of Myra, Francis Street, Dublin today.

A number of roads leading to the Byrne’s family home in Crumlin were closed while he lay in wake yesterday, and a major security operation has been rolled out for today’s funeral Mass.

The Church of St. Nicholas Myra is located in the heart of Francis Street in Dublin’s south inner city and a number of nearby businesses did not open this morning.

The church and its surrounding areas were declared safe yesterday following a sweep by the army’s bomb squad and a number of uniformed gardaí have been stationed outside its main gates.

Gardaí say they are not expecting any trouble but have armed officers on standby. It is understood the Defence Forces are also available if needed.