Killing of Activist sends chilling signal: perpetrators must be brought to justice

WebDesk
June 29, 2021 Comments Off on Killing of Activist sends chilling signal: perpetrators must be brought to justice

The Media Foundation for West Africa is outraged and dismayed by the fatal attack on Ibrahim Anyass Muhammed, aka Kaaka, a social activist at Ejura in the Ashanti region of Ghana, and urge the Police to do everything possible to ensure that the culprits face the law.

The Activist’s killing can send a chilling signal to other outspoken citizens and create an atmosphere of fear and security among the pressure groups community.

Muhammed, also known as Kaaka, was reported to be returning home at about 1:30 am on Sunday when his assailants who appear to have been on his trail, accosted him in front of his home. The hoodlums bludgeoned Kaaka into a stupor and the activist died at the Komfo Anokye Teaching Hospital in the regional Capital Kumasi on June 28, 2021, where he had been referred from the Ejura Government Hospital.

Ibrahim Muhammed, 45, is a member of the Economic Fighters League, a socio-political pressure group, and was known to be vocal on local and national development and governance. He was also very active on social media, particularly Facebook and an activist of the #FixTheCountry movement, an ongoing online protest demanding better living conditions and public service in Ghana.

His last activity on Facebook was a post criticising the arrest of members of the #TheFixCountry movement at the Accra High Court Complex on June 25, 2021.

The Economic Fighters League has condemned the killing of their comrade saying that he was martyred for demanding better for his community.

The statement issued on June 28, 2021, said “Kaaka was an active and concerned activist using social media to expose the developmental problems of his community.” The statement indicated that the deceased activist had received several threats over his activities including a threat from the police to charge him with disturbing public peace. The MFWA has sighted a copy of the police letter dated June 11, 2021. 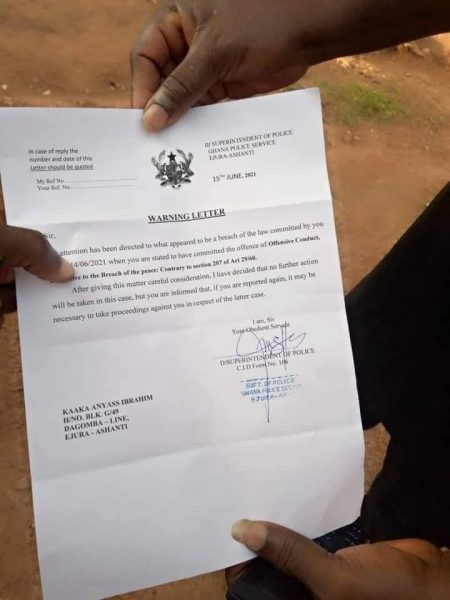 The MFWA welcomes the announcement by Godwin Ahianyo, the Ashanti Regional Police spokesperson, that two suspects have been arrested in connection with Muhammed Kaaka’s murder.

The widespread belief that the activist was attacked for his outspoken demand for accountability and better social services can dissuade other critical voices and discourage participation in discourse on development issues in Ejura and Ghana as a whole.

The incident can reinforce the growing sentiment among Ghanaians that the authorities are imposing a “culture of silence’ by their hostility to critics and intolerance of criticism.

We, therefore, commend the Police for the swift arrests and urge them to pursue the matter to its logical conclusion.