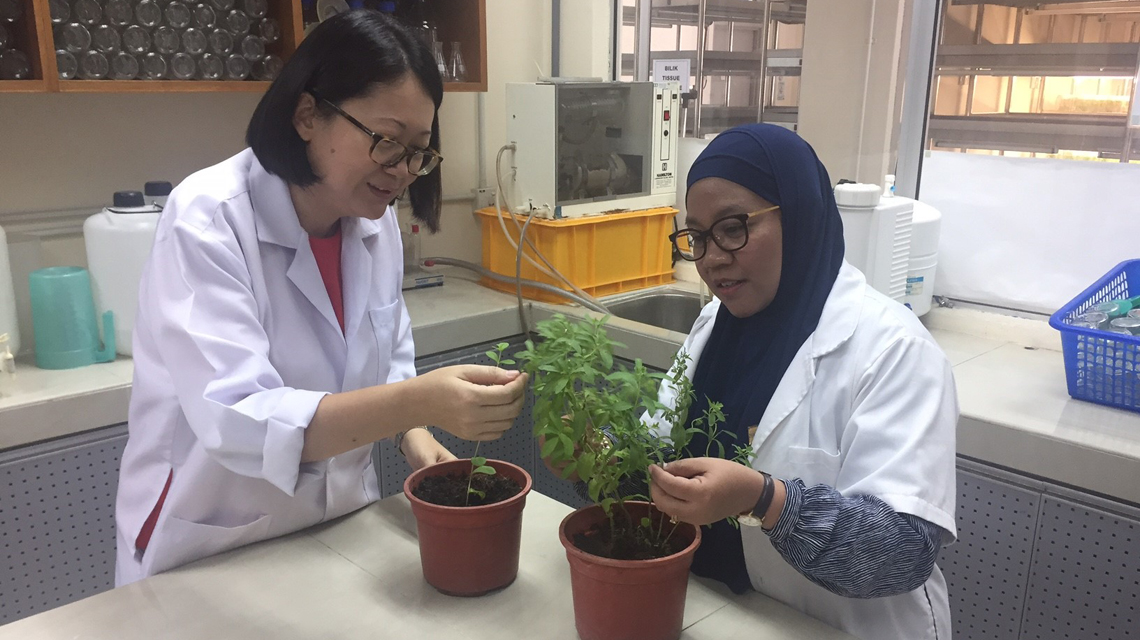 Bangi, Malaysia – Farmers in impoverished communities in East Malaysia will be able to grow a cash crop starting next year – thanks to nuclear science.

Stevia, a natural sugar substitute, is native to South America and would not survive in Malaysia’s tropical climate. Researchers at the Malaysian Nuclear Agency have used irradiation to develop a variety suited for humid and damp conditions. The new breed, which will be available to farmers for the next growing season, is not only tolerant to humidity but is also a lot bushier than the traditional variety, bearing more and larger leaves. This is particularly important because the sweetener is extracted from the plant’s leaves.

While it has been used as a sweetener in parts of South America for centuries, Stevia is only now becoming popular in the rest of the world as an alternative to both sugar and artificial sweeteners.

Malaysia’s Ministry of Science, Technology and Innovation and other government agencies are now working to propagate the plant to farmers in Sabah, on the northern tip of Borneo Island, as part of a community project set up by the government to improve the livelihood of the rural population in East Malaysia. “There is growing demand for natural sweeteners across Asia, and once the right varieties are available, Sabah and other parts of Malaysia will be well suited for their cultivation,” said Norazlina Noordin, a plant breeder at the Malaysian Nuclear Agency.

The IAEA, in cooperation with the Food and Agriculture Organization of the United Nations (FAO), supports countries, including Malaysia, in the use of radiation for agricultural research and development, including the development of enhanced varieties of seeds for improved production. This technique, which is harmless to humans or the environment, is responsible for the development of many favorable varieties, including salt tolerant rice in Bangladesh and soybeans with double the yield of traditional varieties in Indonesia.

Developing new varieties is a trial and error process. Scientists irradiate seeds or seedlings using different doses of ionizing radiation. Radiation induces changes in a plant’s genetic make-up, mimicking the natural process of spontaneous mutation. The mutation process generates random genetic variations and can lead to alterations in different kinds of traits. In many cases mutations are detrimental to the plant, but they can also result in new beneficial traits. From large mutant populations plants that carry the desired trait are selected and subsequently stabilized in the following generations. Once the trait is stable and the superior performance of the mutant proven, a new variety is born. The art of mutation breeding is to select the rare desired mutant from among a mutant population of many thousands of plants.

The irradiation method used at Nuclear Malaysia’s gamma greenhouse facility is called chronic irradiation. In contrast to the more conventional acute irradiation performed at a high dose rate for a few minutes, plants at the gamma greenhouse are irradiated over several months at lower dose rates. One advantage of this method is that it produces a wider mutation spectrum while the general radiation damage to the plant cells is minimized. Furthermore, the chances are lower that plants repair the genetic variations induced by long-term radiation and so “correct” the development of what would otherwise be favourable traits, explained Zaiton Ahmad, a liaison officer for the gamma greenhouse. Chronic irradiation can be applied in a wide range of crops, including flower plants, fruit crops and cereals.