WebDesk
June 12, 2017 Comments Off on Partnerships Key to Sharing Nuclear Science and Technology 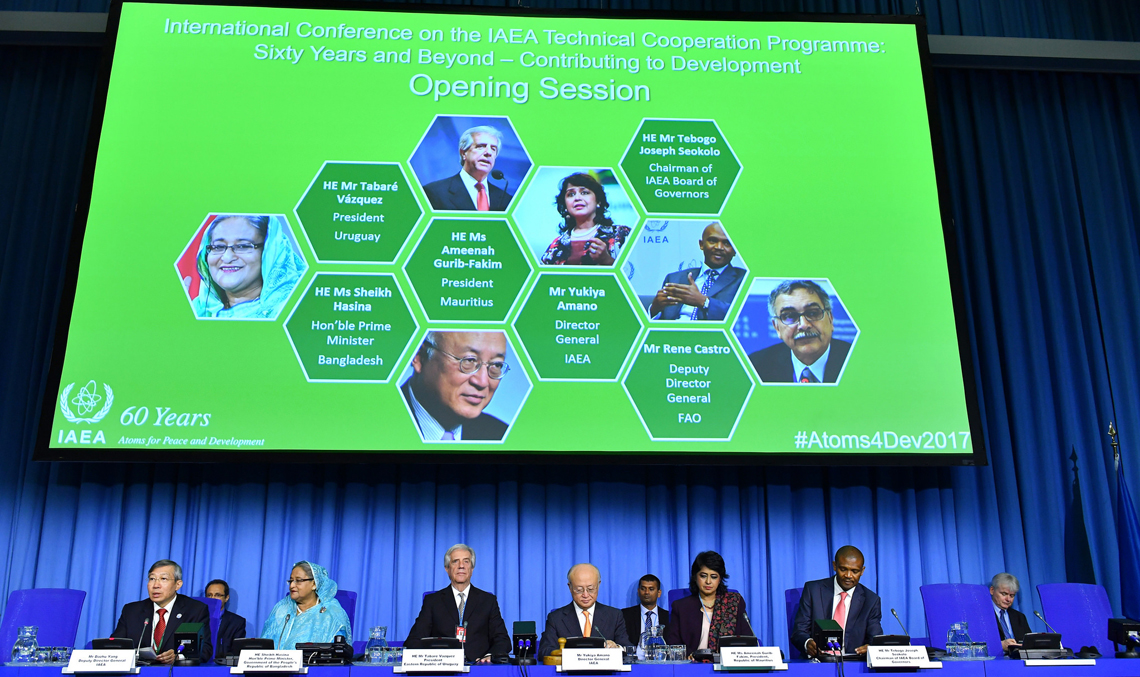 IAEA support and partnerships are essential in helping countries benefit from nuclear science and technology, panellists concluded today at the opening session of an international conference on the IAEA Technical Cooperation Programme.

The event was opened by IAEA Director General Yukiya Amano. High-level speakers at the opening session included the President of Uruguay Tabaré Vázquez, the Prime Minister of Bangladesh Sheikh Hasina and the President of Mauritius Ameenah Gurib-Fakim.

“Science and technology are critical for development,” Mr Amano said.  “Transferring nuclear technology to developing countries is core IAEA business. Partnerships are an essential element of our work.”

The IAEA’s technical cooperation programme, the focus of the three-day event, is the primary mechanism for providing development assistance to Member States. In 2016, the programme delivered support to 146 countries and territories, including 37 least developed countries.

“Together with the Food and Agriculture Organization of the United Nations, the IAEA deploys nuclear techniques to help increase food production, manage pollution, reverse land degradation and restore soils,” he said. “We work with the World Health Organization to help improve the availability of radiotherapy and nuclear medicine.”

President Vázquez, a medical oncologist and radiotherapist who once held an IAEA fellowship, also underlined the importance of collaboration for scientific development. To put nuclear science and technology to the service of humanity’s progress, all of us citizens of the world need to work together, Mr Vázquez said.

“I do not say that just as a ruler but as a scientist as well,” Mr Vázquez said. “Such a task is not easy, but it is not impossible either. As it also requires collective commitments and efforts, none of those present here can remain unaware of it.”

Mr Vázquez gave an overview of how Uruguay had benefited from the IAEA’s technical cooperation programme in areas such as health, agriculture, food security, energy and the environment. He reaffirmed Uruguay’s commitment to nuclear and radiological safety and security as well as non-proliferation.

The President of Mauritius Ms Gurib-Fakim emphasized the importance of science and technology for development in her country.

She commended the IAEA’s technical cooperation programme for helping developing countries, especially in Africa, to use peaceful nuclear technology. Like the rest of the panellists, she also emphasized the role of partnerships.

“Regional and local partnerships are a rich source of knowledge that can help build the scientific capabilities of African institutions,” Ms Gurib-Fakim said. “Only through scientific development will Africa be able to create a pool of human capital capable of achieving the United Nations Sustainable Development Goals.” She encouraged countries to strengthen the linkages between innovation and the private and public sectors.

Ms Gurib-Fakim welcomed the IAEA’s efforts to increase women’s participation in science and technology. “Unequal access for women in science costs billions of dollars a year,” she said.

Supporting women was also part of the message from the Prime Minister of Bangladesh. “If women can get more chances, they can prove themselves more effectively,” Sheikh Hasina said.

Sheikh Hasina outlined  Bangladesh’s successful application of nuclear technology in agriculture and health and talked about  her country’s plans to embark on a nuclear power programme. Nuclear energy is “a safe, environmentally friendly and economically viable source of electricity to meet the increasing electricity demand of the more than 160 million people of Bangladesh,” she said .The government’s aim is to generate 4000 MW of electricity from nuclear energy by 2030.

“Science, technology and innovation helped us bring development to the doorsteps of rural people in Bangladesh,” she said. “The IAEA holds a special place in our country’s development. I call upon developing countries to draw maximum benefits from the peaceful uses of nuclear science.”

The conference will solidify partnerships and help the IAEA in achieving its mandate, said the Chairman of the IAEA Board of Governors, Ambassador Tebogo Joseph Seokolo.

“Technical cooperation is a manifestation of how we can collaborate in a mutually beneficial relationship,” said Mr Seokolo, South Africa’s Permanent Representative to the IAEA.

At the end of the session, Dazhu Yang, IAEA Deputy Director General and Head of the Department of Technical Cooperation, said the wide participation in the conference showed the importance of the IAEA’s technical cooperation programme.

“You have set the scene for the discussions that will take place in the coming days,” Mr Yang said to the more than 1200 participants. “I look forward very much to the results of this conference’s deliberations.”

For more information about the International Conference on the IAEA Technical Cooperation Programme: Sixty Years and Beyond – Contributing to Development, click here.

US to decide on Africa presence in two months, says top officer