WebDesk
May 8, 2015 Comments Off on Government of Canada thanks Canadian health and humanitarian workers for their efforts to assist crisis-affected populations

The Honourable Rona Ambrose, Minister of Health, and Dr. Gregory Taylor, Canada’s Chief Public Health Officer, today marked World Red Cross Day with a show of gratitude to the Canadian health and humanitarian workers who have volunteered to respond to global crisis situations and offer assistance to those in need.

The Government of Canada remains actively engaged and committed to supporting the global effort to protect and promote global public health and respond to crisis situations, and will continue to work with partners in Canada and internationally.

The Government of Canada has a long-standing partnership with the Canadian Red Cross, working together to meet the humanitarian need of crisis-affected populations. Most recently, Canada has responded to the significant impacts of the Ebola crisis in West Africa, as well as the devastating earthquake that struck Nepal on April 25, 2015. As part of Canada’s response to the earthquake, the Government of Canada is supporting the Canadian Red Cross deployment of an emergency health care unit to provide medical assistance to as many as 200 people per day.

In November 2014, the Canadian Red Cross and Government of Canada launched the “Join the Fight Against Ebola“ campaign in response to the Ebola crisis in West Africa. The campaign targets Canadians with the necessary skills and experience to help fill the demand for health and humanitarian workers in Ebola treatment centres in Guinea, Liberia and Sierra Leone. The campaign has resulted in nearly 1,000 Canadian applicants willing to do their part to protect public health on a global scale and fight Ebola.

The Government of Canada applauds those that have deployed to West Africa to provide care to infected patients, joining the monumental efforts of over 10,000 volunteers from the International Red Cross and Red Crescent Movement who–from the outset of the crisis–have been providing essential support services such as contact tracing, safe burials, and community education and awareness, to help contain the Ebola outbreak.

The response to the Ebola outbreak requires coordinated, international efforts. The Government of Canada has been working with a number of domestic and international agencies including the Canadian Red Cross, Samaritan’s Purse and Médecins Sans Frontières, as well as the World Health Organization, other United Nation agencies, the US Centers for Disease Control and Prevention to support governments and communities in West Africa to combat this outbreak.

During today’s event, Dr. Taylor, along with Conrad Sauvé, President and CEO of the Canadian Red Cross, spoke of the efforts being made on the ground in Sierra Leone and Guinea–as witnessed during their recent travel to West Africa–and shared some of their observations, experiences and images from the trip.

“The success of our Government’s work with the Canadian Red Cross and of the “Join the Fight Against Ebola” recruitment campaign is testament to the courage, compassion and dedication of these professionals. Today, Canada is proud to join its neighbours around the world to celebrate World Red Cross Day and thank volunteers for their precious contributions to helping those in need. “
Rona Ambrose
Minister of Health

“The Canadian Red Cross has shown leadership and unwavering commitment to health and safety, through the Ebola outbreak and beyond. World Red Cross Day honours the valuable contributions of volunteers, staff and other supporters of the Red Cross Movement. What these volunteers are accomplishing is not only important to the health of those infected and living in Ebola-stricken regions, it is also essential to protecting the health of Canadians and maintaining public health on a global scale. For that, we should all be so very proud and grateful.”
Dr. Gregory Taylor
Chief Public Health Officer

“The commitment of Minister Ambrose and Dr. Taylor in promoting our recruitment efforts as well as the funding support for the Ebola response is deeply appreciated and led to a tripling of enquiries from Canadian healthcare workers willing to help. We now have an excellent pool of personnel to draw from as we work to contain and end this Ebola outbreak, and potentially for responses to future health emergencies.”
Conrad Sauvé
President and CEO, Canadian Red Cross

“Canada is proud to be a partner of the Canadian Red Cross – and the wider Red Cross Movement – which continue to demonstrate tremendous efficiency and leadership in responding to humanitarian crises, like the Ebola outbreak and now the devastating earthquake in Nepal. Canada will continue to partner with the Red Cross Movement to help meet the humanitarian needs of crisis-affected populations.”
Christian Paradis
Minister of International Development and La Francophonie 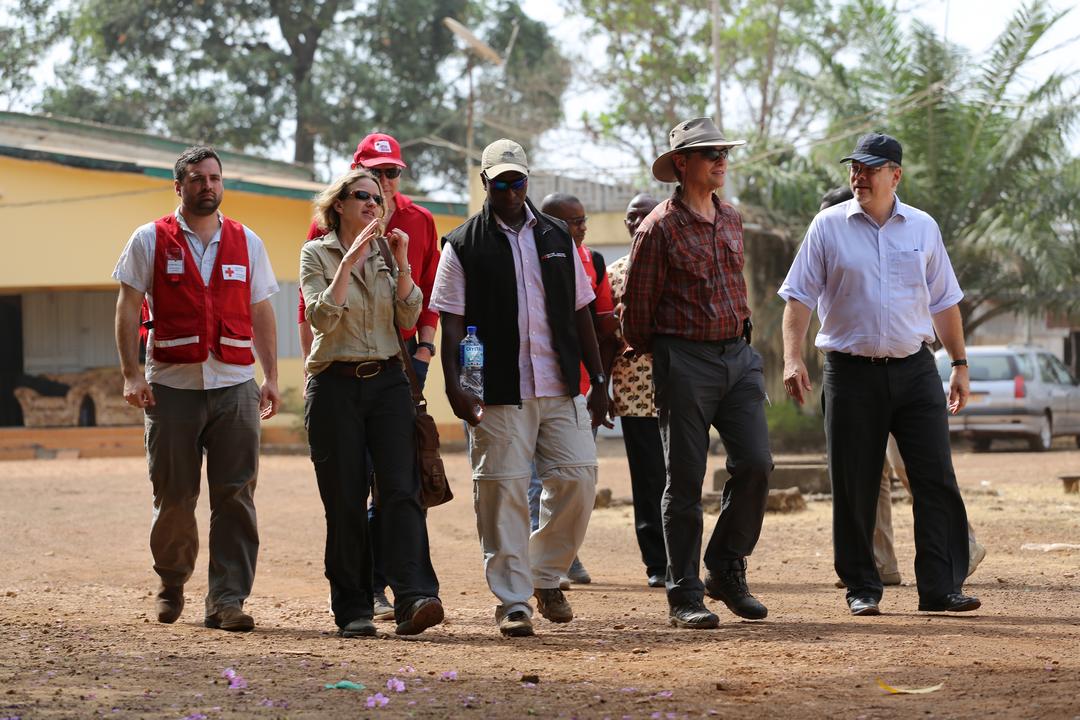