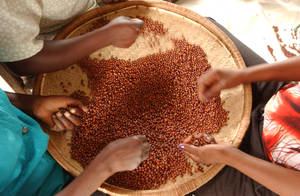 Pulses are an affordable alternative to more expensive animal-based protein, which makes them ideal for enhancing diets in poorer parts of the world.

10 November 2015, Rome – Pulses, including all kinds of dried beans and peas, are a cheap, delicious and highly nutritious source of protein and vital micronutrients that can greatly benefit people’s health and livelihoods, particularly in developing countries — that was the UN’s message at the launch of the International Year of Pulses 2016 today.

“They have been an essential part of the human diet for centuries,” he added, “Yet, their nutritional value is not generally recognised and is frequently under-appreciated.”

Running under the slogan “nutritious seeds for a sustainable future”, the UN General Assembly declared 2016 the International Year of Pulses to raise awareness of the many benefits of pulses, boost their production and trade, and encourage new and smarter uses throughout the food chain.

In a symbolic gesture following his address, the FAO Director-General planted a number of fava beans in a planter full of soil as he proclaimed the International Year opened.

Pulses are part of the food culture and standard diet in most parts in the world and a key ingredient in many signature national and regional dishes, from falafel to dahl to chilli and baked beans.

There are hundreds of varieties of pulses grown throughout the world. Popular ones include all varieties of dried beans, such as kidney beans, lima beans, butter beans and broad beans. But also chickpeas, cowpeas, black-eyed peas and pigeon peas (learn more: What are pulses).

They are an affordable alternative to more expensive animal-based protein, which makes them ideal for improving diets in poorer parts of the world. Protein sourced from milk, for example, is five times more expensive than protein that can be sourced from pulses.

While small, pulses are packed with proteins – double that found in wheat and three times that of rice.

They are also rich in micronutrients, amino acids and b-vitamins, which, the FAO Director-General underlined, are vital parts of a healthy diet.

Low in fat and rich in nutrients and soluble fibre, pulses are also excellent for managing cholesterol and digestive health, and their high iron and zinc content makes them a potent food for combating anemia in women and children. They are a key ingredient in healthy diets to address obesity and to prevent and manage chronic diseases such as diabetes, coronary conditions and cancer.

Because of their high nutritional content, pulses are a staple in emergency food baskets and since they do not contain gluten, they are also suitable for celiac patients.

Benefits for animals and the environment

Crop residues from pulses can be used as animal fodder to increase nitrogen concentration in the diet, which improves animal health and growth.

The FAO Director-General particularly highlighted how the nitrogen-fixing properties of pulses can improve soil fertility, which extends the productivity of farmland, and eliminates dependency on synthetic fertilizers. The latter leads to a smaller carbon footprint and indirectly reduces greenhouse gas emissions.

What’s more, by improving soil health overall, pulses promote below-the-surface biodiversity, too, as they create a rich home for germs, bugs and bacteria of various kinds.

Because pulses as a group are very genetically diverse, they also hold a great potential for climate adaptation, as they enable farmers to select new varieties to adjust their production to changing climate conditions.

Finally, using pulses as cover crops and in intercropping systems – planting them in between other crops or as part of crop rotations — can reduce soil erosion and help control pests and diseases.

The co-chairs of the steering committee of the International Year of Pulses, Aydin Adnan Sezgin and Nadeem Riyaz, Permanent Representatives of Turkey and Pakistan to FAO, made opening and closing remarks at today’s ceremony, which also included a presentation by Mahmoud Solh, Director-General of the International Center for Agricultural Research in the Dry Areas (ICARDA).

Other recent international years have focused on soils, family farming, and quinoa.