A ceremony was held today at the National Air Force Museum of Canada to remember the CC-130 Hercules that crashed near Canadian Forces Station (CFS) Alert 25 years ago. At the service a cairn, was dedicated to the memory of the five people who lost their lives in the crash, the survivors, and the rescuers who risked everything to save them.

The ceremony was attended by many family members of those who died, survivors of the crash, and many who participated in the search and rescue effort—as well as community members and Canadian Armed Forces leadership.

The 1,133-kilogram cairn, shaped like the tail of the Hercules, had been flown to CFS Alert in June and subsequently slung via CH-147 Chinook helicopter 16 kilometers south of the station, where it was dedicated at the crash site. The cairn now serves as a permanent memorial next to the Hercules in the airpark at the National Air Force Museum of Canada, accessible to all those affected by this crash.

“We lost some fantastic Canadians on that day 25 years ago. For families and friends, time has not softened the loss. Survivors bear the emotional and physical scars. And the selfless rescuers still remember that day. Every day our men and women operate in the High Arctic, and we must remember the unique challenges that environment presents as we fulfil our role assuring Canada’s sovereignty.”

“This crash hits particularly close to home for the men and women of 8 Wing. We have just completed another successful Operation BOXTOP, but the dangers of operating in Canada’s Arctic are something always top of mind for our personnel at CFS Alert, as well as our 8 Wing aircrew who supply them.” 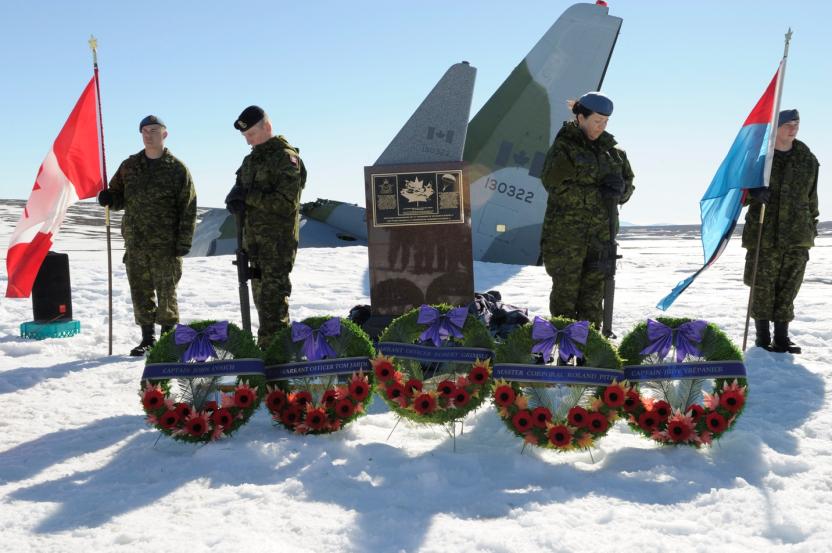 Corporal Brett Guitard (left), Leading Seaman Garnet Robinson, Corporal Yvette Cedeno, and Aviator Alain Fortier serve as sentries at the memorial cairn during its dedication marking the 25th anniversary of the crash of Operation Boxtop Flight 22, which happened on October 30, 1991. The cairn was raised on the crash site, about 16 kilometers south of Canadian Forces Station Alert, on June 15, 2016. Photo by: Sergeant Paz Quillé